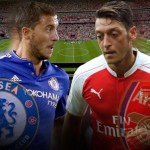 Arsenal could welcome back both Alexis Sanchez and Mesut Ozil. Sanchez has been missing since November with a hamstring issue and Ozil sat out last weekend’s draw at Stoke due to a foot injury – but the pair are expected to start against the Blues. Mohamed Elneny is still awaiting his Arsenal debut with fellow midfielder Francis Coquelin back in training following a knee injury but will not feature, nor will Danny Welbeck, Santi Cazorla (both knee) or Jack Wilshere (leg).

Eden Hazard and Diego Costa could play for Chelsea. Belgium playmaker Hazard has missed the last three matches with a groin injury, but returned to training this week. Striker Costa suffered a bruised shin against Everton last Saturday, but is also in contention to feature, while striker Radamel Falcao (thigh) remains out.