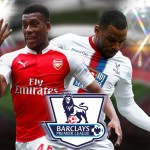 Arsenal have reached the point where they need a near-miracle for a title win and it feels like the imperative now is to button down a Champions League finish and, ideally, reel in Tottenham Hotspur. Their run-in looks favourable and they do have a cushion over fifth-placed Manchester United. Arsène Wenger merely wants victories over teams that Arsenal should be beating, and prayers to be answered. Crystal Palace have an FA Cup semi-final next Sunday. Has this been mentioned at all? David Hytner