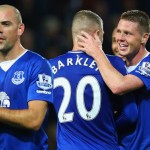 Everton midfielder Tom Cleverley is in contention to make his first-team return at Arsenal on Saturday as Roberto Martinez’s squad nears full fitness.

Cleverley got his first run-out since sustaining an ankle injury in August when he played 60 minutes of an under-21 game on Tuesday.

And asked on Thursday whether the summer signing would play in this weekend’s Barclays Premier League match at the Emirates Stadium, Toffees boss Martinez said: “It is just a case of seeing how he reacts from the game on Tuesday. “The next two sessions are going to be very imp