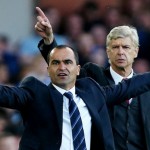 “Against Bayern, Arsenal showed that they can do a bit of everything. They were really, really solid against Manchester United and then they were really disciplined and well organised against Bayern Munich in the same way they were fantastic against Watford and what they did on the ball and attacking, they were very creative and very much an attacking force going forward.

“They are an outstanding, outstanding outfit. They are not one dimensional at all and have a real understanding of how to play in many different ways.”

Arsene Wenger (on choosing between Olivier Giroud and Theo Walcott): “It’s always hard, honestly, because they are two top players. I consider the form and the game of the day but at the end of the season both will have played their share of games. At the moment it is Theo (starting) and in a few weeks it might be Giroud, but what is most important is that they both contribute.”