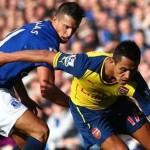 Arsenal have now gone five games without a win against Everton, their worst such run in the history of this fixture.

Steven Naismith has scored in his last two Premier League appearances against the Gunners.

Everton have won none of their last 20 away matches against Arsenal in all competitions (D4 L16).

Mesut ?zil has scored two goals and set up one more in three appearances against Everton in all competitions.

There were four goals scored from just five shots on target when Everton and Arsenal met back in August.

Only Everton (17) and Swansea (16) have dropped more points from winning positions than Arsenal (14) in the Premier League this season.

Santi Cazorla has had a hand in six goals in his last five Premier League games (three goals, three assists).

Roberto Martinez’s side have won just one of their last 10 Premier League matches (W1 D4 L5).