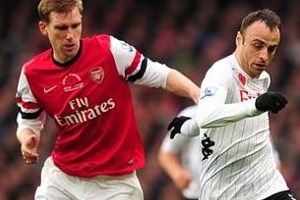 Arsenal forward Lukas Podolski is back following a hamstring injury, coming as a major boost with both Theo Walcott and Nicklas Bendtner ruled out. Kieran Gibbs and Alex Oxlade-Chamberlain, both of whom made comebacks in Monday’s win at Aston Villa, are also available but the Gunners have a number of other injury concerns. Nacho Monreal is a doubt, having twisted a ligament in his foot in the game at Villa Park, as is Tomas Rosicky who suffered a broken nose in the same match. Walcott is a long-term absentee whilst Aaron Ramsey, Mikel Arteta, Bendtner and club captain Thomas Vermaelen remained sidelined.

Fulham defender Fernando Amorebieta is a doubt because of a knee problem. Captain Brede Hangeland could make his first league start since October after returning from back surgery in the midweek FA Cup third-round replay win over Norwich. Forward Darren Bent is pressing for a start after scoring against the Canaries, when manager Rene Meulensteen had made sweeping changes. Goalkeeper Maarten Stekelenburg (ankle) remains a doubt.