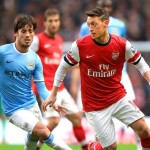 Mesut Ozil is rightly earning the plaudits for his superb displays, but the crucial man on Monday night may be a bit further back in midfield. Mathieu Flamini has stepped into the side since Francis Coquelin’s injury, starting each of the last six games in the engine room.

He is by no means a world-class performer in that position, but against City’s massed attacking resources, Arsenal must be glad they can call on a diligent midfielder who enjoys a tackle. With Aaron Ramsey likely to bomb on, Flamini will have to get through a lot of work.

His success will determine how well Arsenal get on.

He’s had an injury-hit season so far, but it could be time for David Silva to come to the fore for the Blues. He remains the twinkle-toed fulcrum of the side, capable of unlocking even the tightest defences with a waft of that lovely left foot.

Kevin De Bruyne and Raheem Sterling have hogged the headlines this season but if Silva can put a run of games together he could be one of the key men in the title race, let along this match.