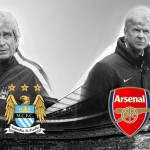 Arsene Wenger, Arsenal: “What I feel is great team spirit and great unity in the dressing room, and a focus to go forward, that’s for sure. After that, we have to answer on the pitch whether we are good enough. We have to accept that [having our character questioned is] part of it but we have to give our answer on the pitch week-in week-out and that [criticism] will slowly die. It was true for a while because we were a young team and a young team can be up and down. But I believe now we have shown it… what we did at Olympiakos is not a team of no character. You need to be special to achieve that.” (from arsenal.com)

Manuel Pellegrini, Manchester City: “It’s not a decisive game as after this we have to play 21 games more. It’s important to try to be the best team from the first round, to play against a team with one point more. It’s a game of six points, to win three and to take three off a rival.”