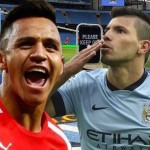 Arsenal have no new injury concerns following their win over Aston Villa last time round. Alexis Sanchez may return to the squad as may Mikel Arteta, who has been absent with a calf injury.

Manchester City could have striker Sergio Aguero available after the Argentine returned to full training following a heel injury. He limped off against Southampton last month and has missed the club’s last four games, but Manuel Pellegrini has confirmed that he is now ready to return to the squad.

City will, however, be without Vincent Kompany, Fernando and Samir Nasri.

AS Roma Not Interested In Selling Daniele De Rossi

Mancini : Carlos Tevez Will Be With Manchester City Next Season