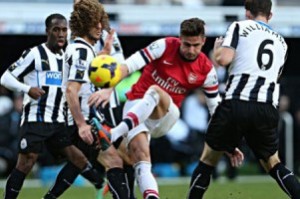 Arsenal have won their last four Barclays Premier League meetings with the Magpies; their best ever run against them in the competition.

The Magpies have lost eight of their last 10 Barclays Premier League games at Arsenal (W1 D1); losing 7-3 there last season.

Only against Liverpool (15) have Newcastle lost more Premier League away games than at Arsenal (13).

The Gunners have won their last two Premier League games, after winning only two of the previous nine.

All four of Mesut Ozil’s Premier League goals have come at the Emirates Stadium but only three of his eight assists have.

Lukas Podolski, with 19 goals and 11 assists in the Premier League has the third best mins per goal involvement in the competition’s history (97 mins), behind Thierry Henry and Sergio Aguero.

Podolski has scored a brace in each of his last two Premier League appearances and has netted five in his last five in the top-flight.

Newcastle remain in the top-half of the table despite losing nine of their last 12 Premier League matches.

The Magpies have scored just 10 Premier League goals in 2014, fewer than any other side.

Arsenal cannot top the table again this season but will send the season having spent the most days at the summit (128).