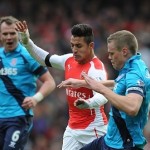 The Gunners have won each of their seven home PL games against the Potters, their best 100% home record against any side in the Premier League.

Stoke are without a win in their last seven PL games on the road (D4 L3), a current winless streak on the road only Newcastle and Southampton (both 9) can better.

Arsenal have lost two of their last three Premier League meetings with Stoke.

Arsenal have averaged 2.4 goals in those seven home PL games against Stoke (17 goals in total), with the visitors managing only three in total.

In all competitions, the north Londoners have now won 13 home games in a row against Stoke (dating back to 1983), their longest such winning streak against any side in the club’s history.

Aaron Ramsey has netted three Premier League goals against the Potters, his joint-highest tally against any side (Also 3 vs Sunderland).

The Gunners have posted a league-high 65.3% average possession figure this season (Man Utd are second with 59.5%).

Arsenal have put away only 5.6% of their PL shots, with that chance conversion rate superior only to Liverpool (5.4%) this season.

Spanish schemer Santi Cazorla leads the way this season with 16 PL chances created, while since 12/13 (when he joined the PL), he’s racked up a league-high 30 assists.