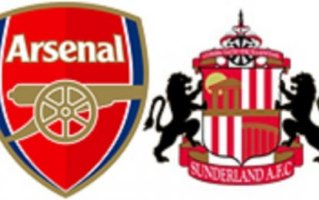 Sunderland have not won away at Arsenal in the league since November 1983, losing 10 of the 14 visits since.

Despite Sunderland not scoring in four of the last five visits to the Emirates Stadium, the Black Cats have taken points three times in those encounters with 0-0 draws.

Mesut ?zil made his debut in the reverse fixture earlier this season and set up Olivier Giroud’s opening goal.

Sunderland have gone six on the road without defeat in the Premier League (W3 D3 L0) – this after winning just one point in their eight PL away games (D1 L7) prior to this run.

Adam Johnson has scored or assisted eight goals in six PL apps so far in 2014, one more than he was involved in over 2013 as a whole (seven in 35 apps).

The Gunners have lost just one of their last 17 Premier League games in the month of February (W13 D3 L1).

Arsenal have not conceded a Premier League goal at the Emirates Stadium for seven hours and 36 minutes.

Sunderland have conceded the highest number of goals following crosses in the Premier League this season (12). Nacho Monreal Yet To Agree New Terms With Arsenal