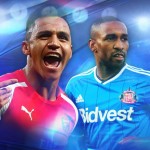 Arsenal are without Alexis Sanchez and Santi Cazorla who both picked up injuries against Norwich last weekend. Mikel Arteta is also out and Arsene Wenger has admitted that he doesn’t know how long any of them will be out for. Wenger will make a late decision on the fitness of Laurent Koscielny and Theo Walcott, although it is thought both will at least make the bench. Kieran Gibbs is available again.

Sunderland will be without Seb Larsson and Jermain Defoe for the trip to Arsenal on Saturday. Larsson (knee) and Defoe (hamstring) both limped out of last weekend’s 2-0 victory over Stoke City at the Stadium of Light, but the striker is not as badly injured as first feared. Defoe, Sunderland’s top scorer with four Premier League goals this season, injured a hamstring in the 2-0 win over Stoke City last weekend.