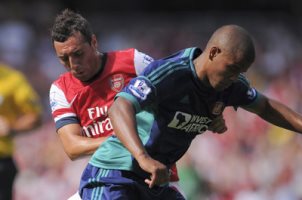 Arsenal will be without defender Kieran Gibbs (hamstring). Midfielder Mikel Arteta is available after serving a European suspension for the midweek Champions League defeat to Bayern Munich, while striker Olivier Giroud is expected to be recalled. Aaron Ramsey (thigh) and deadline-day loan signing Kim Kallstrom (back) are also not fit. Abou Diaby and Theo Walcott are long-term absentees with their respective knee injuries.

Steven Fletcher could have a chance to play his way into Sunderland’s Capital One Cup final team when he returns from injury at Arsenal. The Scotland international has missed the last three games after being advised to rest an Achilles problem, but manager Gus Poyet is expecting him to be available for Saturday’s Barclays Premier League trip to the Emirates Stadium. Defender Carlos Cuellar also returns to contention for the first time since November after recovering from a hip problem, while central defender Wes Brown completes his two-match ban and goalkeeper Keiren Westwood (shoulder) remains on the sidelines.