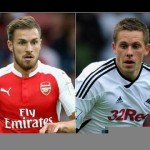 Wenger could change his side for the game. Danny Welbeck is looks set to be rested after recently returning from a 10-month lay-off. while Alex Oxlade-Chamberlain will be out for six to eight weeks after damaging his knee against Barcelona, with Jack Wilshere (leg), Santi Cazorla (knee) and Tomas Rosicky (thigh) also unavailable.

Swansea have no fresh injury worries. Manager Francesco Guidolin is suffering with a chest infection but is expected to take his place in the dugout after resting following training on Tuesday morning. First-team coach Alan Curtis hinted there may be a couple of changes due to a few “bumps and bruises” to keep the squad fresh.