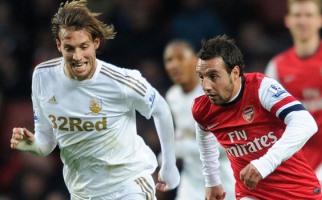 There have been eight goals scored in the last 10 minutes of the last five meetings in all competitions between Arsenal and Swansea.

The away side has scored two goals in five of the last six meetings between Arsenal and Swansea in all competitions.

Arsenal have lost none of their last 13 Premier League home games (W10 D3), conceding just four goals in that run.

There has never been a league draw between Arsenal and Swansea with the Gunners winning five and the Swans four of the nine meetings.

The Gunners have not conceded a first half goal in any of their last 11 Premier League matches at the Emirates. The last opposition player to score in the first half there was Stoke’s Geoff Cameron in September.

50% of the goals Arsenal have conceded this season though have come in three games away from home against the top three and they have the best home defensive record shipping just seven goals.

If the season had started on January 1st 2014, Swansea would be in the relegation zone, two points away from safety.