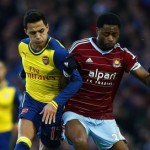 West Ham have won none of the last 13 Barclays Premier League games against Arsenal (W0 D2 L11), losing the last eight in a row.

The Hammers have scored the first goal in four of the last five Premier League meetings with Arsenal, but the Gunners have come back to win on each occasion.

Arsenal are unbeaten in their last 12 Premier League London derbies at the Emirates, but West Ham were the first team ever to beat Arsenal at their new stadium back in April 2007.

The Hammers have won just one of their last seven Premier League London derbies away from home.

Sam Allardyce has never coached a winning team away at Arsenal in the Premier League, losing seven and drawing three of his 10.

Arsenal have won seven consecutive home league games; they have not won eight in a row since November 2005 (13).

West Ham (15) have scored the most headed goals in the Premier League, while only two teams (Burnley 17 & Stoke 11) have conceded more than Arsenal (10, same as QPR).