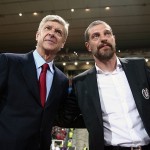 Arsene Wenger: “We’re ready for the fight and motivated to start well. One of our targets is to start strongly. We had a good preparation, which should give us more confidence. The Premier League (means) fighting every single game so we have to prepare ourselves mentally for that and come pout of the blocks straightaway against West Ham.

Slaven Bilic on losing to Astra of Romania in the Europa League third round with an inexperienced squad: “We would want a result (against Arsenal) anyway. When the Premier League starts, we have a game and of course we are looking to get a positive result. Do I need to justify the result here? I told you it was my decision. I have spoken with the people from the club about the Europa League and about next season, which is a huge one. I made this decision, not only for this game but for the game in Malta (in the second qualifying round against Birkirkara). I wanted to go through. I believed that we could go through with this team. I’m very proud of the effort they put in and disappointed with the result.”