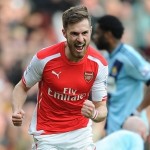 Arsenal have lost just one of their last 14 Premier League fixtures on the opening weekend, winning nine (D4).

West Ham have lost more Premier League games on the opening weekend than any other side (9).

Arsenal have been shown more opening day red cards than any other Premier League side (6).

The Gunners have won their last nine league encounters with West Ham and are unbeaten in 14 (W12 D2).

Olivier Giroud has scored five goals in five PL appearances against West Ham, with four of those strikes coming on home soil.

Theo Walcott has scored more top-flight goals against the Hammers than versus any other opponent (5).

Petr Cech has posted the best saves to shots ratio (min. 50 saves) of any goalkeeper in the Premier League over the last three seasons (78%).