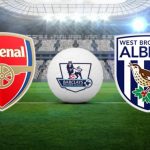 Arsenal face West Brom on Thursday night knowing a win will cement their advantage over Manchester United in fifth.

Arsenal drew their last match against Crystal Palace 1-1, a result which Arsene Wenger labelled ‘disappointing’ and will want his side to bounce back with a win against Tony Pulis’ side.

West Brom suffered a 1-0 defeat to Watford last Saturday with Saido Berahino missing two penalties. The result means their winless run currently stands at four matches, but the west Midlands club look to be safe from relegation having secured 40 points.

Tony Pulis has lost all seven visits to the Emirates Stadium in his managerial career, a record he will wish to rectify on Thursday. Meanwhile Arsenal are just one win away from 500 Premier League victories.