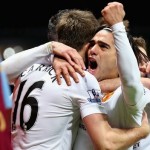 Radamel Falcao scored on his first start in two months as Manchester United were held to a 1-1 draw by Aston Villa.

The home side took the lead in spectacular style; Christian Benteke breaking the deadlock with a wicked curling effort from 18 yards. Falcao equalised for the visitors during the second half before Gabriel Agbonlahor was sent off in controversial fashion.

As is a regular occurrence at Villa Park, Paul Lambert set up his side to soak up the pressure and hit the visitors on the counter attack – an unusual 3-5-2 formation a brave move from the Villa boss, though it paid dividends during the first half as the home side had the better of the chances.

The opening goal had nothing to do with the formation, however, with Benteke producing a moment of class; controlling Fabian Delph’s set piece on his chest before finding the top left-hand corner with a wonderful curled effort from 16 yards.

Manchester United boss Louis van Gaal opted to give Falcao his first start in two months, and although the Colombian was lively on his return, he remained quiet in the final third during the first half – as did striker partner Robin van Persie.

But the on-loan forward may have given his boss something to think about with a well-taken header midway through the second period.

Villa were then reduced to ten men in controversial fashion as referee Lee Mason brandished a straight red card to Gabriel Agbonlahor for what was a very innocuous challenge on former Villan Ashley young.

But despite intense pressure from the visitors following the red card, Villa ensured United failed to win their seventh straight game. Michael Owen Insists His Best Is Yet To Come