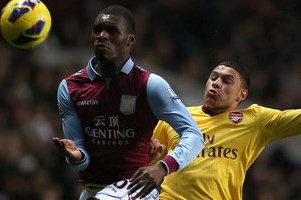 Aston Villa will assess the condition of defenders Ron Vlaar and Nathan Baker ahead of Monday’s Premier League home clash with Arsenal.

Forward Gabriel Agbonlahor, who also missed the cup tie, and goalkeeper Brad Guzan are fit despite having had niggles, but the game is too soon for midfielder Chris Herd and defender Joe Bennett to make their comebacks after injury.

Arsenal expect to have forward Olivier Giroud back from an ankle problem and illness.

England forward Theo Walcott has been ruled out for the rest of the season and the World Cup after suffering knee ligament damage in the FA Cup third-round win over Tottenham.

Alex Oxlade-Chamberlain, fit again following his own serious knee injury, could be back in the squad having played for the Under-21s on Thursday, while fellow midfielder Aaron Ramsey (thigh) and defender Kieran Gibbs (calf) are also closing in on a return.