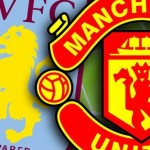 Rudy Gestede may have to settle for a place on Aston Villa’s bench against Manchester United on Friday despite his debut winner last week. The striker, who joined from Blackburn in the summer, scored in the 1-0 win over Bournemouth after coming off the bench but boss Tim Sherwood does not want to rush him after an interrupted pre-season. Jack Grealish (hamstring), Carles Gil (ankle) and Jores Okore (knee) are out while Idrissa Gueye, Jordan Amavi, Jordan Ayew, Jordan Veretout and Micah Richards are also set for their home debuts.

David de Gea has been left out of the Manchester United squad because manager Louis van Gaal still feels the goalkeeper is not mentally up to the job. De Gea, who sat out the season-opening win versus Tottenham last week, is still not able to focus properly because of speculation linking him with a move to Real Madrid, according to Van Gaal. Centre-back Phil Jones (thrombosis) and midfielder Marouane Fellaini (suspended) are out while defender Marcos Rojo will not feature because he still lacks match fitness.