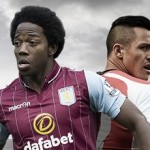 Aston Villa welcome Arsenal to Villa Park on Saturday in what is the first of a tricky run of fixtures for Paul Lambert’s side. The Claret and Blues have accumulated 10 points from their opening four fixtures and currently sit second in the Premier League.

Having conceded just one goal in that time, the Villans currently possess the best defensive record in the country so will go into the clash with the Gunners high on confidence. However, with Arsenal, City, Chelsea and Everton up next, Lambert will be thankful of the points on the board already.

With just one win to their name so far this season, Arsenal will look to kickstart their at a ground in which they have enjoyed much success in the past. The Gunners haven’t lost at Villa Park in this century – a run spanning 15 games – so will look to add to their one win and three draws when they travel to the Midlands. Arsenal Not Interested In Sending Alex Iwobi Out On Loan