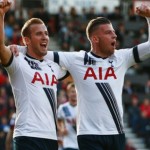 Harry Kane ended his goal drought in spectacular fashion at the Vitality Stadium, scoring a hat-trick to help Tottenham Hotspur to a 5-1 hammering of Bournemouth.

The game started with a bang as Matt Ritchie scored the fastest goal in the Premier League this season after the visitors failed to deal with a cross into the box.

But Tottenham were back level in no time as Christian Eriksen’s pass picked out the run of Harry Kane in behind the Bournemouth back-four, inviting Artur Boruc to bring the striker down inside the box. It was a clear penalty and Kane made no mistake from the spot, dispatching his penalty into the bottom corner.

Moussa Dembele made it 2-1 to Spurs with a tidy finish after bursting through the Bournemouth defence, before a howler from Boruc gifted Erik Lamela with a tap-in to make it three for the Lilywhites.

Another delightful delivery from the excellent Eriksen set up Kane to turn home his second of the game shortly after the interval, and it was a second howler from the Bournemouth keeper which teed up the England striker for his hat-trick strike from point-blank range.

It could have been worse for Bournemouth as Eriksen saw an excellent shot crash back off the post and Kane went down under contact from Boruc inside the box for the second time in the game (only for the appeals to be waved away on this occasion).

The win makes it nine unbeaten for Spurs as they head up into the top five in the table, while that’s back-to-back 5-1 defeats for Bournemouth, who are enduring a tough start to life in the Premier League.