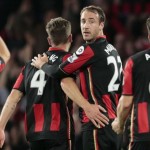 Bournemouth have played Manchester United eight times – all in cup competitions – and have won just once (W1 D2 L5). This victory was a famous FA Cup win in January 1984 (2-0).

The Cherries have won just one of their seven Premier League home games (W1 D3 L3).

Bournemouth have scored four goals in their last two league games, all from the 80th minute or later.

Callum Wilson is still Bournemouth’s top goal scorer in the Premier League this season (5 goals) even though he has not featured due to injury since 26th September.

Juan Mata has created 24 chances for Man Utd in the Premier League this season – twice as many as any other player for the club (Rooney is the next most with 12).