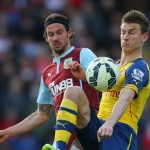 5’ – OSPINA SAVE – Vokes gets free down the left, skipping past Mertesacker and into the box. He takes a heavy touch, and Ospina has chance to rush out to block the shot.

12’ – GOAL! Burnley 0-1 Arsenal. Ramsey scores – Sanchez has a shot deflected into the path of Ozil. His shot, from a tight angle, is blocked by Heaton, and Sanchez has another attempt, and another shot blocked. Then, it falls to Ramsey, and his attempt rifles into the top of the net.

24’ – TRIPPIER FREE KICK – Trippier fires in a free kick, over the wall and curling to Ospina’s right, but the ‘keeper is alive to the challenge, and dives to palm away.

26’ – CAZORLA FREE KICK – Cazorla attempts to find the near top corner with his free kick, and it’s half a yard wide of goal.

50’ – DUFF VOLLEY – Duff spins in the box as the ball drops to volley an effort at goal, but Ospina saves easily.

58’ – HEATON SAVE – Arsenal have had 75% of the ball this half, and Sanchez has space for a shot from 25 yards, attempting to squeeze the ball in at the near post. It’s saved well by Heaton.

70’ – BOYD MISS – Boyd has the ball coming towards him at the back post. He’s unmarked. He’s setting himself. He’s ready to volley from 10 yards out. He misses it.