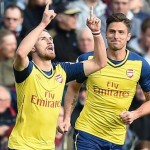 Arsenal maintained their late pursuit of Chelsea at the top of the table with a 1-0 victory over Burnley with a goal from Aaron Ramsey.

Burnley sat deep and were happy to foul Arsenal to disrupt their rhythm, and Arsenal players were equally happy to go down easily to make the most of the indiscipline. The deadlock was broken after just 12 minutes when Ramsey rifled into the roof of the net after Alexis Sanchez and Mesut Ozil had shots blocked.

Burnley and Arsenal both went close with free kicks from Kieran Trippier and Santi Cazorla respectively, but were unable to convert.

In the second half, Arsenal dominated possession, and Burnley continued to play with discipline and obvious limitations. Sanchez brought a smart save with an effort from distance from Tom Heaton, and Burnley also had a couple of chances. George Boyd wasted the best of his side’s when he slipped instead of scoring when the ball came to him, unmarked, at the back post.

Arsenal were in control for almost all of the match, but Burnley made what should have been a nervy scoreline an extremely comfortable one.