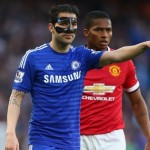 4’ – ROONEY MISS – Young releases Shaw behind Ivanovic. He gets to the byline, pulls it back for Rooney, and he curls a left-footed shot wide of goal. What a miss!

35’ – DE GEA HANDBALL – Young whips in a cross from a deep set piece, and doesn’t beat his first man. De Gea comes out to get a high ball as Chelsea break from deep, and he uses his wrist to clear the ball outside the box. It should at least be a yellow, but nothing is given.

38’ – GOAL! Chelsea 1-0 Manchester United. Hazard scores – Terry tackles Falcao, and the striker loses the ball. Fabregas comes forward, finds Oscar who reverses a pass into Hazard’s path, and he slides in a shot past De Gea.

45+1’ – COURTOIS SAVE – Rooney flicks a pass round the corner for Falcao, and his shot is swept away by Courtois for a corner.

54’ – HAZARD HITS THE BAR – Herrera’s loose pass is intercepted by Fabregas, who releases Drogba down the right. He strides into the box, and his shot deflects off Smalling, over De Gea, and Hazard chases in and shins a shot against the bar from a very tight angle.

61’ – COURTOIS SAVE – McNair has a strike from distance that is so well hit that Courtois can only block it away despite it being straight at him.

77’ – FALCAO HITS THE WOODWORK – Falcao spins Zouma, sizes up a cross, and hits the top corner of the woodwork.