Liverpool’s Champions League hopes are all but over despite earning a hard-fought point at Chelsea. 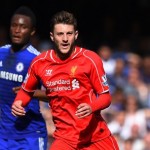 Steven Gerrard scored his first goal against the club that tried to sign him in almost 10 years to cancel out John Terry’s early header.

The celebratory atmosphere seemed to overawe Liverpool’s players, who allowed Chelsea to impose themselves on proceedings.

John Terry headed the home side into an early lead from a Cesc Fabregas corner, and they had opportunities to double their advantage, carving Liverpool out numerous times down the right hand side.

They should have gone into the second half ahead, but lax marking from a Jordan Henderson free kick gave Steven Gerrard a free header from six yards out to level maters.

Both sides came close to winning the game through Philippe Coutinho and Cesc Fabregas, but it finished honours even.

Liverpool are now six points behind fourth placed Manchester United, who have a +14 superior goal difference, with two games of the season remaining.