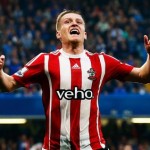 The Blues took an early lead in the Saturday tea-time kick-off thanks to another Willian free-kick but could not build on the advantage.

Southampton levelled shortly before the interval through Steven Davies after what had been a fairly even first half and then had the better of the second period, going ahead on the hour and extending the lead on the break not long after.

Sadio Mane and Graziano Pelle were the scorers. REVEALED : Chelsea’s Mourinho And Arsenal’s Wenger Did Not Interact At The Emirates