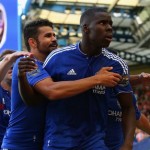 Kurt Zouma scored his first goal in the Premier League.

Chelsea have now scored in 16 of their last 17 Premier League home matches against Arsenal. The only exception in that run was the 0-0 draw on 20 April 2005.

No team in Premier League history has seen more players sent off than Arsenal (79, level with Everton)