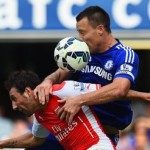 It’s the first time Chelsea have won three top flight home matches in a row against Arsenal since a five-match streak between February 1966 and August 1970. Chelsea are now the last remaining unbeaten team in the Premier League this season.

Chelsea will have 19 points from seven matches in the PL, a total they have bettered only once in top flight history – in 2005/06, when they registered seven wins in their first seven matches under Jose Mourinho and finished first in the PL.

Jose Mourinho remains unbeaten against Arsenal in all competitions, winning seven and drawing five of the 12 matches against the London club.