Chelsea returned to winning ways in the Premier League with a 2-1 victory over QPR at Stamford Bridge. 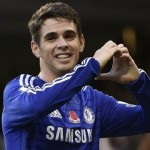 Chelsea got the first of the game when Cesc Fabregas found Oscar in space on the right of the box, and the Brazilian curled in a shot with the outside of his right foot, scoring with a wonderful finish. Either side of that, Chelsea were reduced to shots from distance in the first half.

In the second half, QPR hit back when Leroy Fer’s scuffed shot fell to Charlie Austin, who then back-heeled the ball to wrong-foot Thibaut Courtois as the ball rolled into the goal.

For a while it looked like the careless Chelsea of last season, until Eduardo Vargas saved them, barging Eden Hazard to the ground for a penalty. The Belgian then expertly converted to get Chelsea back on track after a draw at Manchester United.