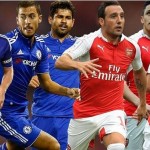 Arsene Wenger secured his first win over Jose Mourinho in the Community Shield on his 14th attempt in all competitions (D6 L7).

Eden Hazard has scored in the Blues’ last two PL clashes with Arsenal at Stamford Bridge, with both goals coming in the first half from the penalty spot.

Theo Walcott has scored 11 goals in his last 11 Premier League starts for Arsenal.

The Gunners have won seven and lost none of their last eight Premier League away matches.

Chelsea have kept five clean sheets in their last seven Premier League games against Arsenal, including the last four in a row.

Arsenal have fired in the most shots on target in the Premier League (39), while Chelsea have allowed their opponents the most in the top flight (38).

Only David James (169) has kept more clean sheets than Petr Cech (165) in Premier League history and the Czech has not been beaten in his last three league outings.