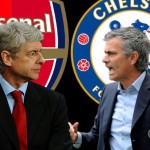 Chelsea are in disarray. A tetchy Jose Mourinho was recorded making an off-colour remark to Everton manager Roberto Martinez in the wake of his side’s 3-1 defeat on Saturday – all because his counterpart ‘jumped ahead’ of him in the interview queue. Martinez’s response added weight to what many already believe – that Mourinho is only gentlemanly when he’s winning. “When he beat us 6-3 last season he was such a nice man,” said Martinez in the recording. “I prefer him like that.”

Now chuck Arsene Wenger into the mix. The Arsenal manager has a running feud with Mourinho and would enjoy nothing more than inflicting another defeat on Chelsea. Can he do it? Recent history says probably not: the Gunners have failed to beat Chelsea in seven Premier League outings, although they claimed a morale-boosting win in the Charity Shield in the annual season curtain-raiser.

Arsenal will climb into second, albeit probably temporarily with victory, while Chelsea could do without chants of “we are staying up” and must start accumulating points soon…