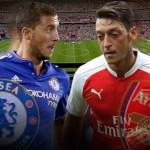 Forward Willian is out of Chelsea’s Premier League clash. Striker Radamel Falcao, playmaker Oscar (both knee) and Pedro (thigh) could be available, but are doubtful. Goalkeeper Thibaut Courtois is out for around three months following knee surgery, while defender Papy Djilobodji, who is not in the Champions League squad, could be included.

Arsenal report no fresh injury worries from the midweek Champions League trip to Dinamo Zagreb. Goalkeeper Petr Cech is set to return against his former club, having been on the bench in Croatia, while defender Hector Bellerin and midfielder Aaron Ramsey are also back in the squad after being rested. Centre back Per Mertesacker could be in contention again after recovering from illness. Midfielder Jack Wilshere is set for an operation on a hairline fracture in his left fibula next week, while forward Danny Welbeck and Czech midfielder Tomas Rosicky (both knee) are also sidelined