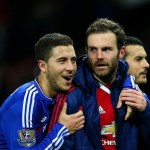 Manchester United have lost more often to Chelsea than any other opponent in the Premier League era (16 times).

Chelsea have drawn their last three Barclays Premier League games at Stamford Bridge – they have never drawn four in a row on home soil in the history of the competition.

There have been four red cards shown in the last five Premier League games between these two teams played at Stamford Bridge.

Wayne Rooney has scored five goals in his last five Premier League appearances; more than he had managed in his previous 25 apps in the competition (4). Rooney has been involved in eight of the Red Devils last 10 league goals (five goals, three assists).

Juan Mata has gone 12 games without registering a goal or assist, his longest spell without a goal involvement in his Premier League career.

Chelsea are on the current longest unbeaten run in the Premier League, going without a defeat in eight league matches now (W3 D5 L0). Despite this, they still haven’t recorded back-to-back wins in the league this season.

The Chelsea boss has lost just one Premier League game in his 20 matches at the club (W13 D6 L1).