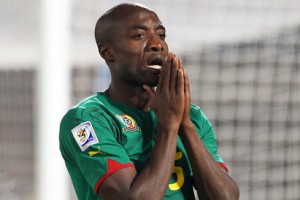 With the new Premier League season just around the corner, teams are scrambling to strengthen their respective squads.

And with the World Cup at full swing in South Africa, talented players are on display and clubs from all around the world including the Premier League would be keeping a close eye on any stand out performer.

One player that has caught the eye of Premier League clubs are Real Mallorca’s Cameroon international striker Pierre Webo.

It is said that the talented striker is wanted by West Brom and Wigan Athletic.

The Daily Mail has reported that the Premiership pair are trailing the powerful centre-forward and are close to making an opening bid.

The £3m-rated Webo, now age 28, who has spent the last seven years in Spain with Leganes, Osasuna and Mallorca, was courted by Wigan last summer.