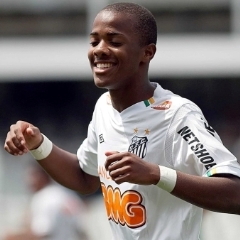 Andrade, 16, has just signed pro terms with Santos and is seen in Brazil as Neymar’s replacement once he leaves for Europe.

Manchester United, Manchester City, Chelsea, Arsenal and Liverpool have all sounded out Andrade’s representatives about his intentions and his short-term plans.

Andrade had six months at Benfica as an eleven year-old and his new pro deal carries a €50 million buyout clause so highly-rated he is at Santos.