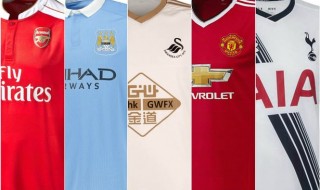 There’s no doubt that watching the talented football clubs battling it out is thrilling to watch. But, did you know that your love of the game, as well as the love of all the football fans around the world, have made this sport quite lucrative for these popular clubs? For instance, Liverpool and Chelsea’s new shirt sponsorship deals have helped make the cumulative value of Premier League shirt deals push past the 200 million pound a season barrier for the very first time.

Part of the Premier League’s success is its international appeal, which many companies are eager to capitalize on. As such, it’s not surprising that the Premier League has captured almost 20 overseas sponsors from over 10 different countries including Thailand, China, and the US. The only teams with purely British-based sponsors are Southampton, Norwich, Stoke, Newcastle, and Liverpool.
It is also important to note that Crystal Palace, Bournemouth, and West Ham will have new sponsors for the new season. And although football has a gambling ban, several club shirts will have sponsorship from various gaming companies, like All Jackpots Casino, this season.

All Jackpots Casino is a well-respected and popular casino powered by the incomparable Microgaming software. This means that players can expect excellent game choice, gameplay, and security. In fact, they offer over 650 games (like video poker, slots, table games, etc.)s that are of the highest quality, filled with attractive animations and graphics, superb functionality, and realistic sound effects. Plus, their customer service is excellent — someone is always available to answer any questions you may have or help you solve any issues you may come across.

The popularity of gaming companies has helped their owners make a splash in the football club arena. In fact, the combined value of the shirt deals has more than doubled in the past years. For instance, during the 2010-2011 season, they were worth about 100 million pounds. To help you gain some perspective, the value of this seasons deal is a gain of well over 100 percent.

In addition, Manchester United has the most lucrative shirt sponsorship deal in the UK as well as the biggest kit supply deal in the world of football. United has a new deal with Adidas that has a value of 70 million pounds a year; this deal lasts until 2025. This considerably more than Real Madrid’s deal which is worth 30 million pounds a year, placing them squarely in second place in terms of shirt deals with the highest value. This information is based on data compiled by PR Marketing for Sportingintelliginece.

Premiere League trio Liverpool, Chelsea, and Arsenal round out the top five deals, with each team earning approximately 28 million pounds a year from their deals.

Also, US supplier New Balance has agreed to a new 10-year kit deal with Liverpool, this after a negotiation of a similar deal with Warrior; their parent company. Chelsea is still enjoying their long and fruitful relationship with Adidas and Arsenal is now in their second year of club deal with Puma. Jordi Alba Linked With A Move To Manchester United