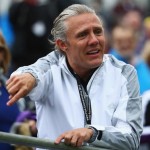 Reports are out claiming that former Fulham star Jimmy Bullard says that English teams underestimating European sides has been their downfall in recent years.

Many vehemently claim that the Premier League is the best in the world but on the basis of the performances of English clubs in Europe over the last few years, such claims seem to be delusional.

Bullard believes that it is wrong to place so much emphasis on the Premier League and has insisted that English teams not taking European sides seriously is one of the main reasons behind their failure in European competition over the years.

The ex-Wigan Athletic and Hull City midfielder told The Express: “I think we put the Premier League on a pedestal and we under-estimate other teams. When Premier League clubs go out in Europe, we’re not that strong or play correct football.

“For entertainment, the Premier League is great but once you see Chelsea against say Real Madrid or Bayern Munich, they’re not as good technically.

“I feel there is no surprise we don’t do as well as what we think we should do. I’m not surprised only one team won the other week. They have more quality.

“I think the Premier League is all about power, pace and energy and abroad, it’s about owning football. It’s completely different to what Spanish teams do.”