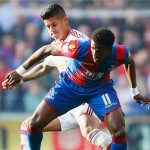 De Gea was forced into another key first half save when Dwight Gayle went through after a delightful through ball by Yohan Cabaye.

United had plenty of the ball but rarely threatened, with Ander Herrera spurning their best chance, losing his footing as he tried to turn Anthony Martial’s cross in from 12 yards.

Palace dominated the second half, creating several clear chances to break the deadlock. Cabaye missed the best of them, miscuing a volley just wide from Ward’s cross, before Scott Dann was inches away with a thumping header from Cabaye’s corner.

The travelling United support blasted out “Attack, attack, attack” throughout, as a sign of the discontent at Louis van Gaal’s unambitious tactics, which have seen United fail to score in 295 minutes of football.