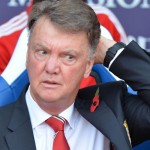 Are United fans starting to turn on Van Gaal?

The chants of “attack, attack, attack” could be clearly heard as the travelling support grew tired of their team’s complete lack of creativity in front of goal.