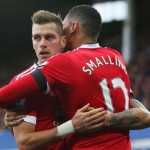 Manchester United mounted a rousing recovery from their 3-0 defeat at Arsenal a fortnight ago with Wayne Rooney scoring against old club Everton in a convincing 3-0 stroll at Goodison Park.

United could easily have been out of sight before half-time when Rooney sprung the home side’s offside trap, but his cutback for Anthony Martial was blocked by an Everton body before landing fortunately in the arms of goalkeeper Tim Howard.

The last time United had led 2-0 away inside the opening 25 minutes of a Premier League outing was during their infamous 5-3 defeat to Leicester 13 months ago, but there was little prospect of a repeat collapse here.

Rooney finished off the home team on 62 minutes when Schneiderlin picked up a loose pass from Phil Jagielka to send Herrera scampering clear. He picked out Rooney in space to plant the ball beyond Howard in finding the net against his old club for the first time in seven outings.

With Manchester City enjoying a 5-1 win over Bournemouth at the Etihad Stadium, Louis van Gaal’s side remain two points adrift of their local rivals at the summit of the Premier League table.