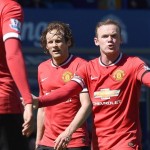 McCarthy opened the scoring within the first five minutes with a tidy finish through David De Gea’s legs, following an Everton counter-attack that he had started.

United enjoyed the greater possession in the first half but Everton doubled their lead in the 35th minute through John Stones, who headed home from Leighton Baines’ corner.

Louis van Gaal brought on Radamel Falcao for Maroune Felliani at half-time but the Colombian was unable to change the game.

Kevin Mirallas made it 3-0 in the second half after confusion among the United back four allowed the Belgian to break through untracked while Romelu Lukaku was clearly offside.

The result takes Everton into 10th while United remain in fourth, with a seven-point gap over Liverpool. Fiorentina Must Sell Before Bidding For Javier Hernandez