Marko Arnautovic’s stoppage time penalty sent Stoke City leapfrogging above opponents Everton and into the top half of the table after a stunning 4-3 win at Goodison Park. 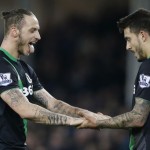 The teams went into the game level on points, but the Toffees had won just one in five, whereas the visitors were full of confidence following their 2-0 victory over Manchester United on Boxing Day.

For all of Everton’s attacking intent, it looked as if they were going to drop more points right from the start of the game. The Toffees were guilty of leaving far too much space at the back for Stoke to exploit on the break, playing right into the hands of the Potters.

And twice the visitors took advantage before the break in an end-to-end first-half.

First a flowing attack saw Bojan and Marko Arnautovic work the ball through to Xherdan Shaqiri to finish and then just before half-time it was Shaqiri again who restored Stoke’s advantage with an outrageous lobbed finish.

Romelu Lukaku had equalised for Everton midway through the first half, but the Toffees really should have troubled Jack Butland more in a first half in which they looked threatening throughout.

Everton were even better after the break, with the outstanding Ross Barkley pulling the strings in midfield, and it was little surprise when they equalised, with Lukaku finding the back of the net for the second time.

Barkley was in the thick of the action again to tee up Gerard Deulofeu to give Everton the lead for the first time in the game in the 71st minute, and at that point it looked as if the Toffees were on course for a morale-boosting comeback win. However, over-attacking tactics in the final 20 minutes, coupled with tired legs after the Boxing Day evening kick-off, proved to be Everton’s undoing.

First Joselu slotted home after poor goalkeeping from Tim Howard, and then John Stones hauled down Arnautovic in the box in the 90th minute to hand the visitors all three points.

For all of Everton’s attacking threat, it was again their defensive frailties that undermined them, and it is that which looks likely to condemn the Toffees to mid-table once again. For Stoke, the future looks bright as their summer signings continue to gel into a thoroughly impressive and entertaining side. Does the top six beckon?