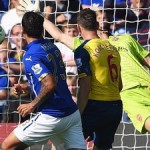 Leicester have scored at least once in each of their last 17 league games at home.

Ulloa’s first goal in English football came against Arsenal, in a 3-2 FA Cup fourth round loss with Brighton.

Leicester’s goal was the first time Arsenal conceded to a promoted team in the PL in six, since a 4-1 win at home to Reading on 30 March 2013.

Arsenal have only won three of their last 10 Premier League away games (D2 L4).

Arsenal are now unbeaten for eight PL matches – this is their best unbeaten run since December – January of last season, also eight. They fail to beat a promoted side for the first time in eight matches (1-1 at Southampton on 1 Jan 2013).

Leicester are now unbeaten in four at home in the PL since a 0-2 loss to Fulham on 10 April 2004. The have two points after three matches in the PL this season, the same as Manchester United. Carles Puyol : Most Important Game Of The Year!