Another Jamie Vardy goal and a stunner from Riyad Mahrez put unlikely leaders Leicester back on top of the Premier League as Chelsea’s woes continued. 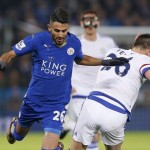 The fact that Leicester went into the game as marginal favourites was the perfect illustration of just how ridiculous this Premier League season has been, but the Foxes were well worth their 1-0 lead at the break.

It was the outstanding Mahrez picked out the run of Vardy for the opener, with the striker leaving John Terry rooted to the spot before tucking a clinical finish past Thibaut Courtois.

An injury to Eden Hazard stifled Chelsea’s already blunt attack and it was little surprise when Leicester stretched their advantage after the break when Mahrez picked out the top corner with a beautiful finish.

Jose Mourinho threw caution to the wind with some attacking substitutions in the second half and Loic Remy ensured a nervy finish, but Leicester held on for the win that puts them back on top of the pile and a full 20 points clear of Chelsea.

No longer can this be called a hot-streak for Leicester and they must be considered strong top four contenders at the very least.

Chelsea were a complete shambles at the back, but showed some signs of life after the introduction of Pedro and Remy late on. However, the defeat means that Mourinho’s side remain just a point above the relegation zone and their dwindling hopes of European qualification are increasingly looking like a pipe dream. Who’d have thought it?!