Top-flight new boys Leicester City twice came from behind to secure a 2-2 draw at home to Everton on the opening day of the season. 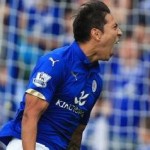 The first top-flight encounter between these teams for a decade was initially an entertaining, full-blooded affair as the promoted hosts did their best to compete with one of English football’s more attractive attacking outfits.

Everton opened their account with Aiden McGeady’s fantastic strike – his first goal for the club – but the Foxes quickly levelled when record signing Leonardo Ulloa capitalised on uncertainty at a corner.

Late in the first half the visitors restored their lead with a classic break down the left, which Steven Naismith finished with aplomb: like McGeady, his goal went in off the crossbar.

The second period was less enjoyable for the neutral as, while Leicester improved, Everton dropped down a gear.

And with four minutes left the hosts equalised for a second time as substitute Chris Wood – who was set to join Wolves earlier in the week – coolly slotted home after a lucky ricochet off Phil Jagielka.